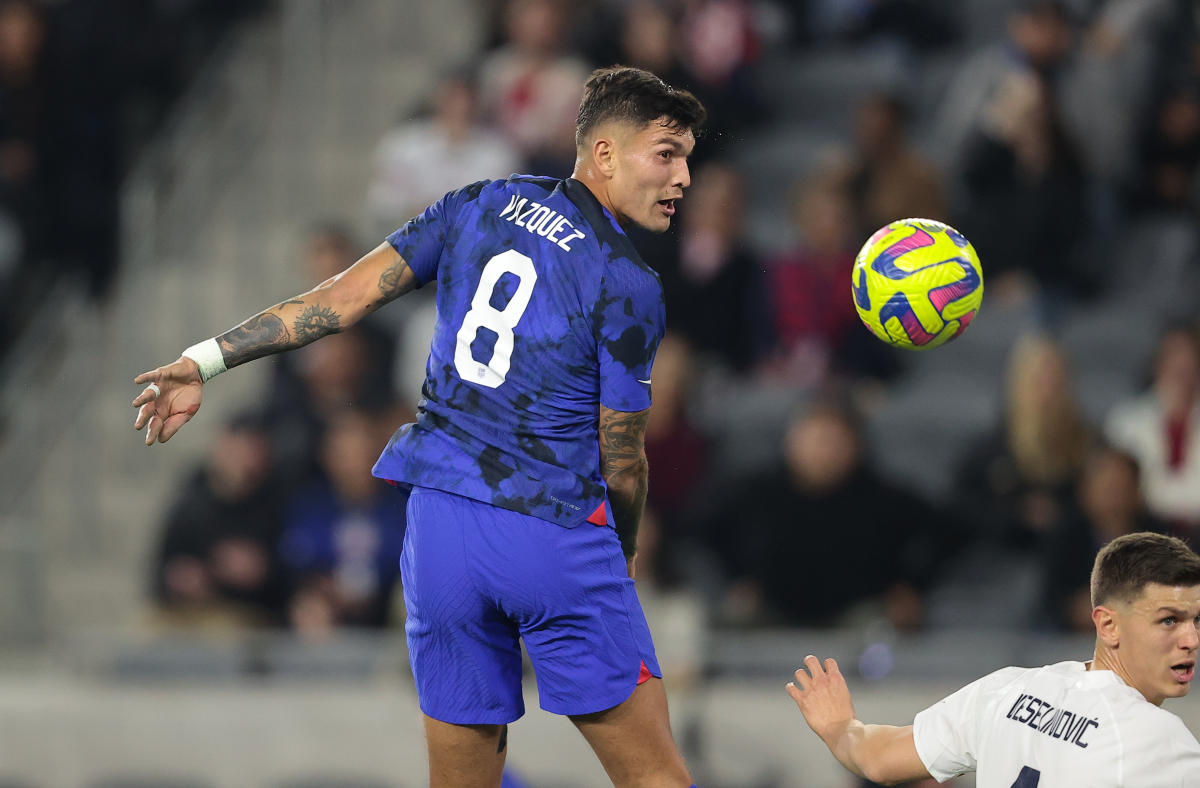 LOS ANGELES — Over the past month, the United States men’s soccer team has been in the headlines for mostly negative reasons. Drama surrounding the team revolving around Gregg Berhalter, Gio Reyna, his parents and the 2022 World Cup. Then there was the sacking of general manager Brian McBride. But the USMNT was able to briefly put that aside on Wednesday as the January camp kicked off with a 2-1 loss to Serbia at BMO Stadium.

Brandon Vazquez has won his first national team cap. He had the first scoring chance of the game for the United States minutes into the game, but hit it just a little wide. In the 29th minute, he received a perfectly placed cross from Julian Gressel and fired a clean header past Serbian keeper Djordje Petrovic.

Vazquez scoring goals is nothing new as he has rapidly improved over the past year with 18 for FC Cincinnati. One of the biggest talking points when looking at the USMNT roster versus the next few years before the 2026 World Cup is of course the striker position. Vazquez should be a feasible option if his trajectory continues. The problem is that Mexico is largely in the same situation and Vazquez is a Mexican-American with dual nationality. What he thinks in terms of deciding which country he will represent in the future remains to be settled, but perhaps this start to the year and this camp can play a role in convincing him to wear the red, white and blue.

When you look at the 24-man roster for this camp, Cade Cowell is one of the names that stands out. The 19-year-old forward has come a long way for the San Jose Earthquakes, becoming one of the most exciting young players to watch in MLS. He is fearless on the ball, dangerous in transition with his speed and also a good passer. The finishing touch is a bit lacking and it was visible against Serbia.

He had a great opportunity in the first tearing up the pitch and receiving a ball from Alan Soñora, but the shot went off target. For a 10-minute stretch in the second half, he took control of the game, hitting the post twice in the 55th minute.

Then moments later he got another chance and sent it wide. Although he wasn’t on the scoresheet, his quality is evident as he was the USMNT’s best player of the night in the 72 minutes he played. He should be a key part of Team USA at the U-20 World Cup, and more performances like this will only strengthen that stock.

“Cade, wow, what a performance. I’m so proud of him,” USMNT interim head coach Anthony Hudson said. “He was just outstanding today. Really direct, aggressive, brave – I saw him have some amazing moments, I think tonight was another level.”

Gaga solid in the net

It can be strange to talk about the keeper after giving up two goals in a loss. But when that goalkeeper is an 18-year-old player who plays for Chelsea, it’s justified.

Gaga Slonina became the youngest goaltender to play for the USMNT on Wednesday and actually had a great night. The two goals he conceded were due to breaking the wall from a free kick and a bad defensive blunder which left him in a vulnerable position. Otherwise, he had some big saves, including a frantic double save in the 30th minute to keep the game scoreless at that point.

The national team goalkeeping squad is full of names like Matt Turner and Sean Johnson leading the pack, but Slonina will be there and you should watch him closely in this new World Cup cycle.

Melbourne runner-up who was ‘breaths away from dying’